This is where you go to find data on interest rates, financial reserves, money, deposits, GDP, prices, employment, production numbers and trade (and more).

Data is available for most countries of the world.

BTW, I like the different kinds of interest rates available: money market, discount, lending, desposit, and short or long government bonds (for most countries).

FYI, sometimes historical data for certain concepts and countries is not available.
Posted by Charles Allan at 5:27 PM No comments:

Do you know how to analyze a contract? How to look for hidden problems, implications, or how future events might effect that contract?

A good place to begin here with this recommended review of contracts!

You can get historic currency exchange rates, bond and interest rates, plus commodity prices, in old editions of our online New York Times.

Limit your search by date, and do a keyword search like price of gold, currency exchange, or similar words. There should be a brief article listing the prices.

Book Review: The Other Path by Hernando de Soto

In The Other Path, Hernando de Soto makes the populist argument for capitalism and property rights in the 3rd world.

The social and economic environment of many 3rd world nations resembles feudalism, with entrenched economic privileges and near-overt ethnic discrimination. The privileges of the elite are protected by law, which creates economic stagnation for the poor - if they follow the law, which, out of the need for survival, they don't!

So, an informal economy springs up, with noisy microbuses and illegal markets. For the majority of the people, this is where market clearing prices exist. People live as squatters, oftentimes in rather nice houses.

Trouble is, you are outside the law and you do not have formal title to property or legal protection.

De Soto argues that the fait accompli of these markets and businesses should be recognized formally and given protection of the law. This action unlocks capital (via loans), reduces crime, and brings people psychologically into the community.

At the time, Peru was fighting a Maoist insurgency in The Shining Path (hence the title of this book), but De Soto's work stands as an interesting contribution toward our understanding of the black market.

Presented to better inform you about the nature of information out there in the world today.

Yes, artificial intelligence has progressed to the point that increasingly, news providers are creating content written by, for lack of a better word, robots.

Unfortunately, the world is not purely logical with fixed rules and completely knowable data sets and this is what robot written stories are going to miss.

Just like us turbo chimpanzees, you can also mess with robot minds.

By the way, check out this article about mechanical cockroaches influencing the behavior of other organic cockroaches. Don't be fooled!
Posted by Charles Allan at 12:30 PM No comments:

Ever wish you could do even more precise word searches than AND, OR, NOT in a database?

There are advanced and algebraic (more on that in a second) search features hidden in most databases.

First up: proximity searching. These searches allow you to search two words within a certain occurrence of each other.

Near Operator (N) - N5 finds the words if they are within five words of one another regardless of the order in which they appear.

For example, type tax N5 reform to find results that would match tax reform as well as reform of income tax.

Within Operator (W) - In the following example, W8 finds the words if they are within eight words of one another and in the order in which you entered them.

For example, type tax W8 reform to find results that would match tax reform but would not match reform of income tax.

In addition, multiple terms can be used on either side of the operator. See the following examples:

OK, see the algebra-like parantheses above?

It also works for searches like (Argentina or Brazil) and (inflation or devaluation) so you can search several words for each slot and still keep your intentions together.

Always click the help function of each database to see exactly how to use their special commands.
Posted by Charles Allan at 11:26 AM No comments:

1. Go to Mergent and choose advanced search
2. Select Index on the far right
3. Add as many other parameters as you want (profits, sales, other financials)

Get results from that index that meet that criteria.

Or you could generate a list for 1 or 2 attributes for all of the companies on the index. 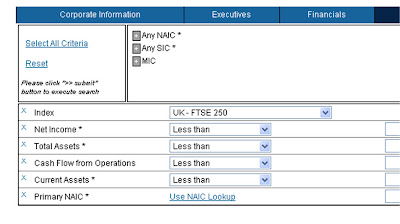 Posted by Charles Allan at 4:34 PM No comments: