Here are some resources for academic journals, magazines and newspapers written in Spanish and sometimes Portuguese.

More importantly, these are PUBLICATIONS FROM LATIN AMERICA and the perspectives and topics will be quite different from North American ones.

Posted by Charles Allan at 2:23 PM No comments:

Here are some suggestions for your career search:


Use Reference USA look up any kind of business by geography, type, size, sales and cold call them for any available jobs.

Example: show me insurance companies with more than 20 employees in Texas, Colorado, and Florida.

The video focuses on identifying business competitors but it works for this purpose as well.


Here are our books on job hunting-

Plus our books on:


Overview Video on Getting Job Hunting Resources at Alkek:

Getting into Graduate School:

Ever wonder what to read next or how to find those hidden gems only a librarian would know?

Here's the economics section of our GoodReads.
Posted by Charles Allan at 11:46 AM No comments:


Here's a list of food and agricultural data stats from the USDA. 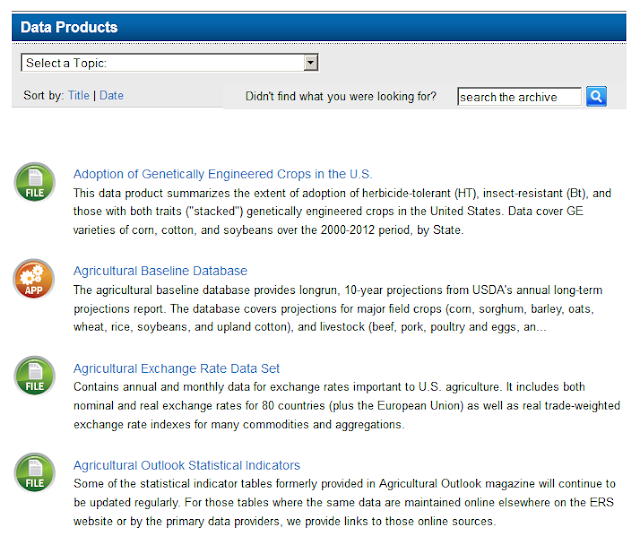 Posted by Charles Allan at 10:15 AM No comments:

Here's a great way to uncover some of the -ahem- controversial methodology behind our official government numbers. The alleged motivation? A desire to beguile the masses, lower government payouts to social security (which is tied to inflation) and good old fashioned naivety.

Blogging cult favorite John Williams has a website that shows his reasoning about revising the official figures of inflation and unemployment (among other things).

Read about Mr. Williams and decide for yourself.

What is Google Scholar?


Google Scholar searches the contents of many (but not all) academic journals. However, it does not provide access to the fulltext material. If you are off-campus, you will be prompted to log in or buy the article.

If you follow the Alkek Library link to Google Scholar here, you will have to sign in ONCE with your NET ID and then it's all clear sailing.

In any case, please don't buy the article - you can get it through us.  If you hit a dead end, use interlibrary loan.

Google Scholar does not search ALL the scholarly literature because some publishers restrict access.

Posted by Charles Allan at 11:58 AM No comments:

Labels: How To Use The Library, using the internet for research

The impact factor is a measurement of how influential a journal is.

Researchers use it to determine how important an article might be or whether getting published in the journal carries any weight.

The JCR provides quantitative tools for ranking, evaluating, categorizing, and comparing journals. The impact factor is one of these; it is a measure of the frequency with which the "average article" in a journal has been cited in a particular year or period. The annual JCR impact factor is a ratio between citations and recent citable items published. Thus, the impact factor of a journal is calculated by dividing the number of current year citations to the source items published in that journal during the previous two years

Here is the detailed explanation from the impact factor people, Thomson Reuters/ISI themselves.

Here's how you get the impact factor.


Go to an ISI Citation Analysis database (different ones for different disciplines).


After you find a citation, look over to the right. 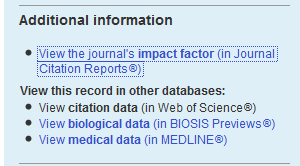 Which then takes you to this screen.

Posted by Charles Allan at 1:38 PM No comments:

Labels: career, economics, graduate school, How To Use The Library, research_tips

Great article from The Atlantic summarizing the sad situation that US banks are able to conceal the true state of their financial health through legal loopholes.

Article starts with a broad summary then gets good and wonky (we like that!)

Good quote: “Investors can’t truly understand the nature and quality of the assets and liabilities. They can’t readily assess the reliability of the capital to offset real losses. They can’t assess the underlying sources of the firms’ profits. The disclosure obfuscates more than it informs, and the government is not just permitting it but seems to be encouraging it.”

Check it out.
Posted by Charles Allan at 8:57 AM No comments: 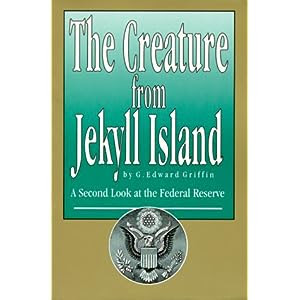 Link to Our Copy of The Creature from Jekyll Island: A Second Look at the Federal Reserve

Just what is the Federal Reserve? It's actually a privately controlled system of private banks that decides the nation's money supply and interest rates, among other functions. As America continues to monetize its debt and flirt with a currency crisis, profound questions about who is doing this and why should be asked.

The author introduces the reader to the banking cabal that conjures our privately controlled money supply out of thin air (so far, so good). He then tries to push a paranoid, conspiratorial view of history in which mainstreet USA is being attacked by well-organized enemies. This elite is a true witches' brew: it's capitalist, feudalist, communist, socialist, atheist, and based in Europe and New York City.

Actual wonky details of the operations of the financial system, an intelligent discussion of why people might want a central bank (even if you disagree), and actual proof for multiple assertions are lacking in the book.

I can't really recommend this book. It's a poorly researched, simple-minded, nativist vision of the world for people that don't want real details - just a confirmation of their prejudices and beliefs.

I hope this is not your only introduction to the Federal Reserve.

However, I would recommend this book on the history of money, as well as my review on the great Austrian economist Ludwig von Mises if you want to understand a little more about money.
Posted by Charles Allan at 1:28 PM 4 comments: